Adventure around high ridges of Langtang around sacred lake of Gosaikunda 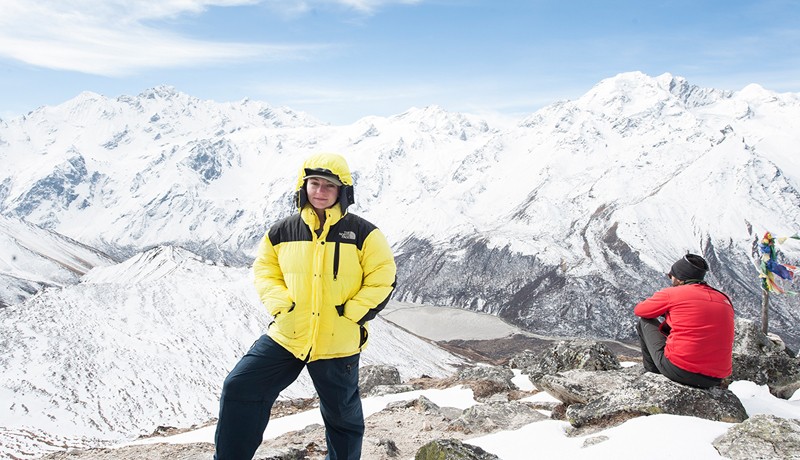 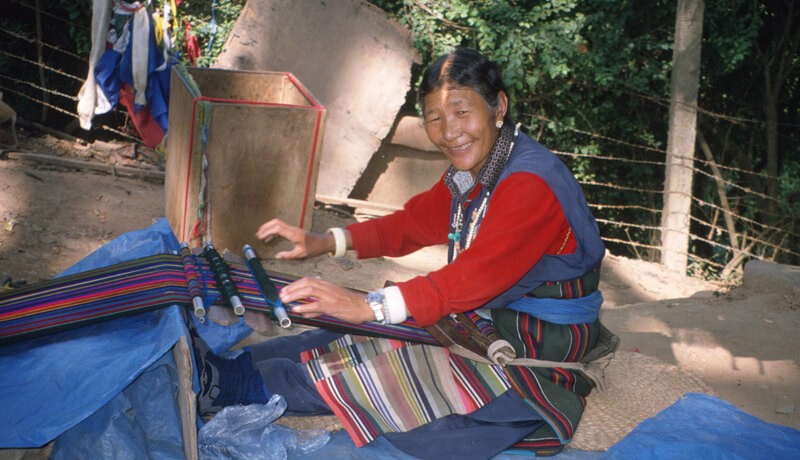 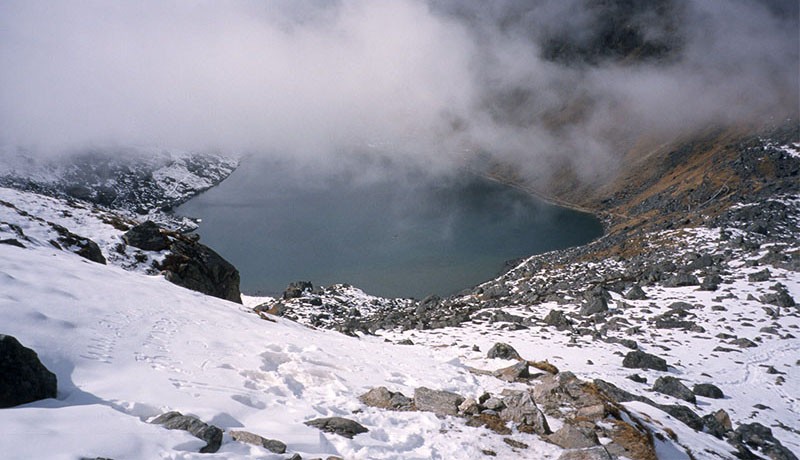 Holy Gosainkunda Lake Trek guide you a scenic and cultural adventure with a touch of old mythology and a holy spiritual walk to Gosainkund Trekking, a perfect journey on high ridges of Langtang Himal situated around the central Himalaya range of mountains which includes Ganesh-Langtang and Jugal Himal range of peaks.

Holy Gosainkund Lake regarded as one of the important and holy pilgrimage spots for both Hindu and Buddhist religions, as per great Hindu myth belief is that Gosainkund a pond as the vicarage and made by Lord Shiva (one of three main Hindu deities).

Hindu believes that this pristine glacial pond was formed digging of the land by Trishul (a holy Trident) weapon of Lord Shiva, thousands of Hindu and Buddhist pilgrims from India and Nepal visit Holy Gosainkund Lake Trail every year especially on full moon day, which falls in the month of August, the special auspicious Hindu occasion of ‘Janai Purnima’ (changing of holy threads) festival.

Starting Spiritual Adventure Holy Gosainkunda Lake Trekking with an exciting overland  5-6 hours drive towards the north of Kathmandu to Dhunche Town, the gateway to many Trekking destinations in the Langtang region and the old Trans Himalayan Trade route of Nepal and Tibet.

This trip leads to a climb into enchanting serene woodlands of tall rhododendron-magnolia-pines and oaks tree lines were elusive and rare Panda seldom seen around this deeply forested area. Our walk finally leads to Gosainkund after walking past Singh Gompa and Lauribina ridges.

We Having a full rest day to explore this fascinating holy place with awesome views of snowcapped peaks, our walk leads to cross a high pass of east Laurabina-La 4,600m/15,091ft also known as Gosainkund Pass to reach the eastern ridges passing some parts of the Helambu area of Kutumsang-Thotung-Danda and Golphu-Bhanjyang to reach Chisapani on the northern hills of Kathmandu valley, here with super views of the sunrise over mountains.

This marvelous and remarkable Holy Gosainkunda Lake Trekking concludes with a short drive from Sundarijal back to Kathmandu after fascinating Trekking around the high hills of Langtang Himal.

Best season: Spring (March to May and Autumn (September to November) is one of the best seasons for Langtang Gosainkunda Lake Trek. The climate is sunny and warm with excellent views, if you wish to avoid crowds and enjoy some alone time with nature then taking this trip during the winter season (December, January, and February) are also good and could be an option for this trip. 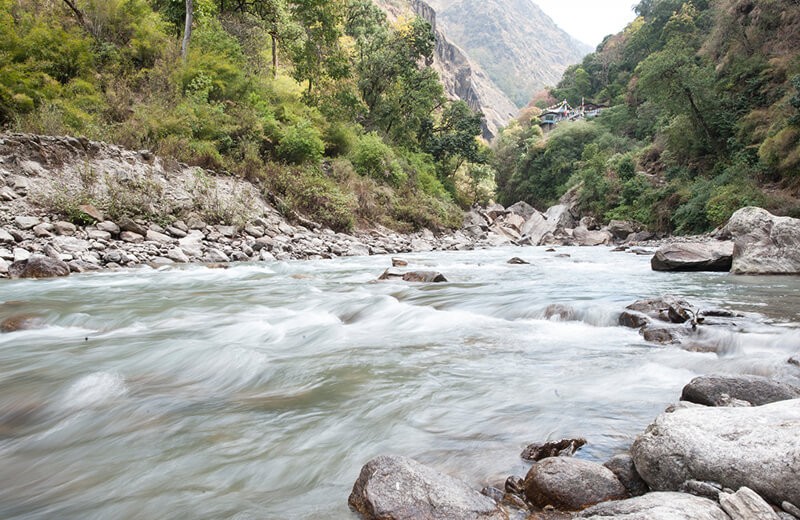 It is our great pleasure to make sure that you are picked up by a representative of Nepal Spirit Adventure upon your arrival at Kathmandu airport. After completing the formalities with customs (obtaining or showing your visa) and retrieving your bags/luggage all you will have to do is to look out for our representative at arrivals who will be holding a Nepal Spirit Adventure display board with your name on it. Transfer to your hotel and our manager will brief about the trip details and you can take a rest, go for a wander into the city or visit our office- it all depends on how you feel, your interests, and what time you arrive in Kathmandu.

Starting this marvelous trip to Langtang Valley, taking an early morning scenic drive from Kathmandu to Dhunche district and major town of Rasuwa and Langtang area, drive leads north passing interesting towns and farm villages, journey continues towards the cooler area above mid-hills leaving behind low land of rice terraces to reach the entrance of Langtang National Park in Dhunche 1,950 m for an overnight stop in the comfort of the nice lodge.

Morning leads to a climb into a lovely forest of rhododendron, oaks, and pine trees with views of Langtang and Ganesh Himal and as far towards Manaslu and Annapurna Himalaya, a steep climb but scenic walk into a beautiful forest where more than 10 different species of rhododendron found around, passing summer pasture and then on the pleasant winding trail to Singh Gomba / Chandanbari village with a cheese factory and an old monastery on top of the village.

From Shing Gompa, walk leads to Gosainkund, starting with a climb into pine and rhododendron forest then over Lauri Binayak pass at above 3,932 m, walk leads past Laurebina and Cholang Pati. After Lauri Binayak with fantastic views of Ganesh Himal and Langtang Lirung reaching at holy Gosaikund Lake area for the overnight stop. The legendary and myth story of this holy place as per the ancient Hindu epic, Gosainkund a pond believes as the vicarage of Lord Shiva (one of three main Hindu deities) and Goddess Gauri. Hindu believes that this pristine pond was formed due to digging of the land by Trishul (a holy Trident) weapon of Lord Shiva, thousands of Hindu and Buddhist pilgrims from India and Nepal visits Gosainkund every year especially on full moon day which lies in the month of August, the special auspicious occasion of ‘Janai Purnima’ festival.

An amazing holy spot for full rest day where you can hike to high hills around Gosainkund for better views of Langtang Himal range with Ganesh and Manaslu towards the western horizon, take a walk around the holy pond where you can observe a rock in the form of Lord Shiva at the center of the pond, nearby lies Bhairav and Sarswati Kunda another holy glacial ponds.

After a pleasant and enjoyable stop at Gosainkund, a tough morning walk to climb over Laurabina eastern or Gosainkund pass at 4,600 m / 15,091 ft, the highest point of this adventure after walking past Ganesh and Surya Kund. From the pass downhill all the way with few short ups and down to overnight stop at Gopte Odar, a small settlement located in the middle of a forest on route Kathmandu and Helambu area.

From Ghopte, morning walk leading son winding trail most of the way with a short steep climb to Thadepati, where the Helambu and Kathmandu trekking trail joins. Thadepati offers views of peaks and scenery of rolling hills and valley, this place with 5-6 lodges and teahouses after a nice break walk leads downhill to Kutumsango village for an overnight stop.

After Kutumsang village, morning walk with uphill through farm fields, then into the forest with views of surrounding landscapes and snowcapped mountains of Ganesh-Langtang to Jugal Himal, this pleasant walk leads past Gulphu-Bhanjyang village, then reaching closer to Kathmandu valley with an overnight stop at Chisapani, after a walk uphill through farmlands and villages with wonderful views to Patibanjayang village, a nice small village from here uphill for an hour to Chisopani danda for last overnight stop. Chisopani village with nice lodges placed on a ridge north of Kathmandu Valley on route Langtang, Helambu, and Nagarkot, offers stunning sunrise/ sunset views over an array of mountains.

After catching the morning sunrise over the mountains, the last day walk of this adventure leads to nice pleasant forest and farmlands on a downhill walk, passing Tamang villages of Burlang and Chepu Bhanjyang with views of Kathmandu Valley. The walk continues downhill to Sundarijal (meaning beautiful water) a nice and pleasant place with forest and freshwater streams. From here an hour downhill to reach the northern rim of Kathmandu valley at Sundarijal, taking a short drive to Kathmandu where this wonderful adventure concludes, afternoon free for individual activities and shopping. We invite you farewell dinner.
Customize My Trip

Ram has been professional and very friendly from our very first email correspondence. The trek organized by him was fantastic, probably the best holiday experience I have ever had before. His trek guise was kind and knowledgeable and was great! In addition to my time spent on the trek. If we ever come back to Nepal, I will certainly use the tour with Nepal Spirit Adventure. Ram, Thank you very much for your amazing assistant throughout my entire stay here in Nepal. All the service was wonderful which we can't forget in my lifetime.

Duration: 9 Days 8 nights
Price: US$690 per person
(All Inclusive Price)
Book This TripCustomize My Trip
Based on 1 review
Trip map view or download it View Gallery Download the trip or Print It